That's two of my most favourite sports people passed away far too young in a matter of four months. First V8 Supercar driver Jason Richards at 35 years of age & today my all time hero Jim Stynes at 45. Both were taken by forms of cancer after brave & valiant fights to remain with their families.

I came to Aussie in 1986 & within a couple of years was introduced to that confusing (to a Kiwi!) sport of Aussie Rules Football. Right from the word go big Irish Jim was a favourite. A great player, later Captain of the Melbourne Football Team, Best & Fairest winner, Brownlow Medalist in 1991, great team player & what a legend of the game!

However what Jim did off the field showed him to be a true gentleman, a carer of people & someone willing to use his notority for the betterment of others. In 1994 along with film director Tim Currie, Jim cofounded The Reach Foundation. This is how they describe the ethos of Reach on the web site 'Reach was born from a desire to inspire every young person to believe in themselves and get the most out of life & has been making a positive impact in the lives of young Australians for nearly two decades.'

As an ardent footy fan, for your football skills on the field & off as President Jim, I applaud you, for your great family values & integrity I adore you & for all your hard work as a motivator & empower of our greatest resource, our youth,  I hold you in great respect.

You are a very sad loss for so many reasons. The world is a much poorer place without you. 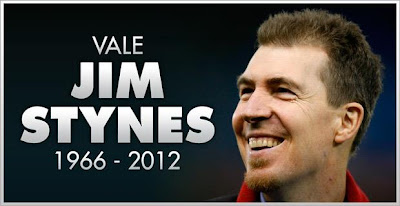