I love Friday night stitching while watching footy. It was made even better this week as I took part in as our monthly online Friday Night with Friends hosted by Chez of Gone Stitchin & Friday Night With Friends on Facebook hosted by Gail. Even one of my beautiful girls from my Thursday group, Ellie, takes part on FB & seeing that I haven't got off work to go to our group for about two months it is great to see her & what she is doing online.
Hun-bun and I were stitching up a storm. Hun-bun hogs the Ott light & sewing caddy while I snuggle next to him and his blankie enjoying having my much cuddlier boy close by. 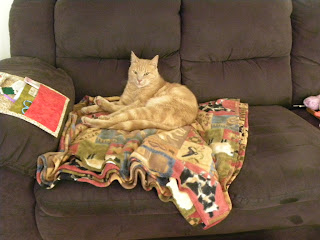 ﻿
That's my seat now in the middle!

We started with some stitchery. 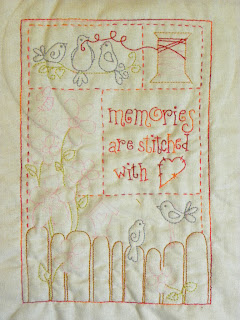 Then after going to bed to read, had a nocturnal turn & got up again at 1am to cut out a Christmas block ready for applique. 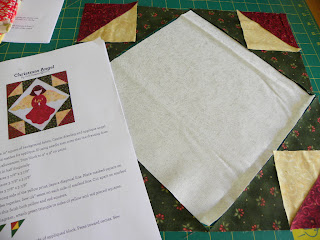 The weekend took on a decidely lazy turn (loved it!) and Saturday night there was more footy and then a DVD marathon of Lark Rise to Candleford - another series in the vein of Downton Abbey but following the lives of the Hamlet people of Lark Rise compared to the town folk of Candleford. If I had know that 'Mr Bates' from Downton was in this I would have watched it earlier. Brendon Coyle has such a lovely smiley face.
This marathon stitching & watching session resulted in what I thought was the finish of my Christmas applique. It is only now that I look again & I realise not only is my little angel missing her blusher but her halo has also slipped. That will have to be fixed. 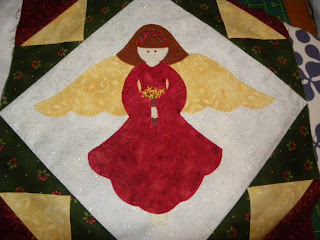 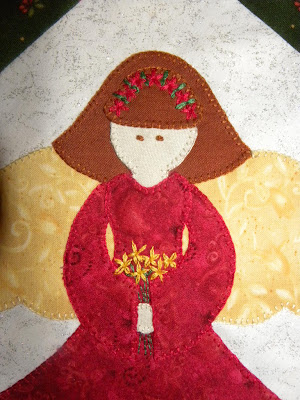 This afternoon while watching the Eagles overrun the Bulldogs I finished off the stitchery. There was some un-stitching once I decided the standing birdy did not enjoy having black legs so restitched them with a slightly darker shade of grey/blue. 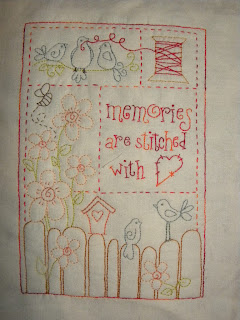 Now I have the usual problem, two more lots of stiching finished, to go into the machine sewing pile. Maybe that's what I need to concentrate on over the next few weeks. The next little stitchery is already drawn for tonight's viewing of a bit of The Voice, Call The Midwife & maybe another epidose of Lark View. What a lucky duck I have been with my lazy weekend.
There are 64 other Friday Night with Friends sewers signed up on Chez's blog so if you haven't visited already, get over there and check out our world-wide get together.
Have a great week friends!
Tracee xx  Hun-bun xx
Posted by Quilt Kitty at 6:52 PM