Whoops Muma Did It Again! 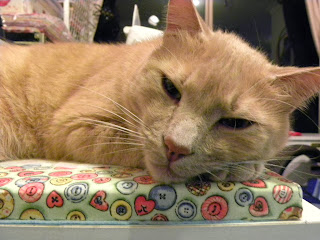 I'm no literary cat like my little big brother Brunnie was but desperate times call for desperate measure friends and I needed to tell you what muma has gone and done. Thursday started like any other day, just like Wednesday, just like Tuesday but little did I know that by late that night muma would get a message of foreboding on the Facebook thingy.
Now I know muma thought & thought on this message, delayed answering her final decision and did discuss the matter with me but friends there has been a travesty of justice (I read along when muma reads murders in bed & I learn that from one of her books). Justice has not been served for HB Honeycat, only cat & King of the World!
Friday night muma was quite excited, Saturday morning muma was sad & worried and Saturday afternoon muma hopped in the car and drove off to alter both our lives as we know them. I may sound dramatic friends, but a drama this is. Not two hours later muma back home with

﻿
Whose Mia you may politely ask..... Mia is a CAT! Muma says Mia is my new little sister! What would Brunnie says friends - I know what Brunnie would say..... he said grrrrrr rrrrrr grrrrrrr when I came to live with him & muma. Some of that might have been because I tried to jump repeatedly on his back, I was only young, I though small cat, he young too, but no, old cat, he was always grumpy. So friends I have been on my best behaviour, only one grumpy last night. I grrr at Mia, Mia grr at me then we both go and find somewhere to nap. Mind you, its easy to continue on business as usual when Mia spends all day under muma's bed. Muma says Mia even more scaredy cat than me so I'm feeling quite good about that. Mia's mum of five years couldn't take her to their new house so poor Mia homeless, no wonder she scared...
Maybe it's not a complete miscarriage of justice friends (love my legal speak!) but here you judge for yourselves.... 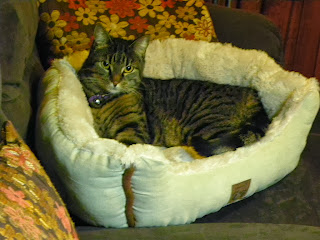 Mia did only sit in the fluff-bed for 10 minutes but muma was pleased seeing I think fluff-bed is evil torture and won't go near it. Life as I know if is changed friends, only time will tell how this story will continue......
Innocent until proven Guilty muma!
Purrs Hun-bun!   =^ .. ^=
Posted by Quilt Kitty at 8:40 PM