No Photos Mum - I Look Wonky!

My poor little old furboy Brutus had a trip to the vet yesterday. Hence, his not wanting to pose for photos due to his wonky look. The left side of his nose has swollen up, squashing his eye slighting & giving him a decidely lion look from the left hand profile. Hopefully after an injection & a course of antibiotics he may be back to normal.

There is the chance it will be a tooth absess which would mean anesthetc & surgery that at nearly 20 the vets said 'he is unlikely to survive' (inset tears here!).  Being such an old timer it is also common to get tumors too but the vet thinks if that's the case, he won't recover his symmetrical good looks but old age may take him before the tumor does (inset tears here!). Precious little man is looking a little worst for wear & although he has always been a small cat, he is now the grand weight of 3.1 kgs, less than half what his 5 year old brother (the minature donkey) weighs. 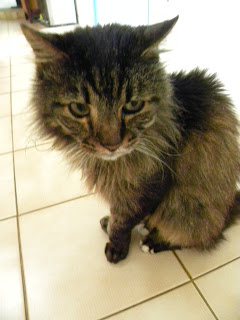 Of course, I had kept myself awake half the night before wondering what was wrong with mum's 'little man' & expecting the vet to say, your being unkind, time to let him go (insert tears & shaking here!). However, what the gorgeous young women did say was 'there's still life in him yet!' (inserts lots of tears here!). He's eating & drinking, walking OK with his athritis & has a good purr with his mum most days. So fingers crossed the tablets work & old Brun gets to see his 19th Christmas & hopefully his 20th birthday in April.

The vet asked about getting Brutus as a kitten & then said, 'come this way, I have something to show you'. Bless her heart, she took us in to one of the kennel rooms that currently houses 6 tiny kittens of about 5 weeks old (insert copious tears here!). That was like Christmas for me, having cuddles with all of them & little kittens trying to climb on me while I cried & laughed & told all the furbabies how beautiful they are. They had been dumped at about four weeks old & found in a bin. They were scared & trying to defend themselves when first brought in but after only a week of great care were gentle & sweet already. Hopefully in a few weeks when ready, they will all find a wonderful forever home. After being so scared & sad about little Brun's fate, what a lovely time that was. It was also a gentle reminder that although there will be no replacing my little man when the time comes, there will also be other furbabies in the future needing a good home & in return bringing great joy & love.

So today little Brun is having a lovely day. The vet also cut his claws so no more 'wheelies' on the tiles when he tries to get to a fast trot. No more, click, click, click in the middle of the night either as he decides time for a biccy or two at his favourite snacking time of 3am.

Today I have had a lovely day too. I have done some sewing for my last gift in the Santa Sack Swap, caught up on some work for tomorrow as I have Jury Duty (fingers crossed no long trial for me), did the minimum housework, read blogs, played Words With Friends on Facebook & done some baking.

I have found another benefit that we no longer need a loan or have to go without fabric in order to buy bananas - making banana cake out of the mushy ones. So the night is ending with a big cup of tea, banana cake & watching those poor lost souls on Brideshead Revisited. 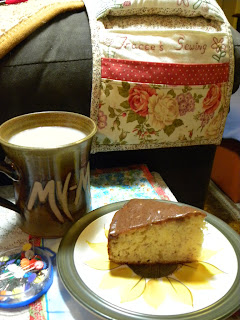 I hope your Sunday has been as sweet!

Email ThisBlogThis!Share to TwitterShare to FacebookShare to Pinterest
Labels: Brutus