Muma's doing some cleaning & she doesn't like doing that & she's not that good at it so there is a lot of muttering going on elsewhere in the house. It will take her ages so thought it was a good time to say 'Meow!' and bring you up to date on our goings on. 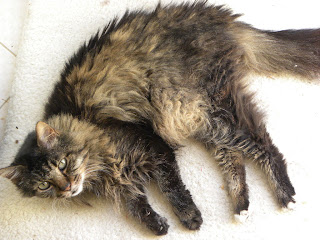 Here's me lying on my fluffy cushion in the laundry. That was Saturday morning, sun, fluffy, fresh air & purrs - bliss. Some of you have been asking after me in your emails - big purrs to thank you. I have just given muma two weeks of worry. I didn't mean to but something inside me just said 'Brutus - no more drinking' so I didn't. Mum started to freak out straight away as I am famous for having big potty drinks. Muma says that is why I have outlived my brother Biscuit & lots of other fur babies Muma & Grandma have had. 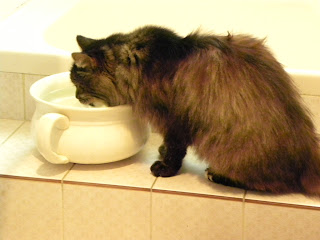 That's me & my water potty last September, inseperable. So I just stopped drinking my water & after a few days of that muma cried cause she figured I was going to die. She gave me a little crystal bowl of watery milk, carried it everywhere & stuck it in front of me all the time. I had a little bit but just wasn't thirsty. I did drink more when muma gave me all milk but Muma says that's not good for me either. When muma left it unguarded my little 'big' brother Honey-bun drank it all. Isn't it cool how such a big male cat has such a wussy name - thanks for picking that Grandma ; ) 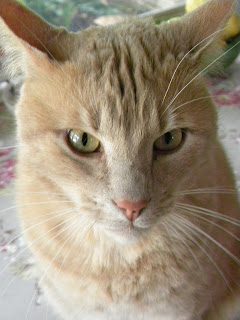 (even Hun-bun wonders how he got that name)﻿
Because muma was waking up all hours of the night to give me milky water she also started getting up at 6.30 AM!!! & taking me for walks in the garden & to do my 'business'. Hun-bun comes too & now even though muma is so not a morning person, every day at 6.30am & 6.30pm, muma, Hun-bun & I go walkies & then sit in the garden. It's our nice time together, though I can see muma quickening the pace now Perth is experiencing Autumn, by winter it might be a jog. Muma jogging at 6.30am - hahahaha - meowwwww!

Anyway, thanks to muma, we are over that now & muma got all teary again when last Thursday night I started drinking water again & now me and potty are as friendly as ever. Boy do I have the power to mess with muma's emotions! I'll try not to do it again : (   Now it's only just over two weeks and I have my big birthday - 20 years old! Party, party, party!

Muma has managed to do some other stuff this weekend now I am drinking again. Muma's watched the footy, she loves footy. Her footy tipping hasn't started well though & did you know my muma can swear like a wharfie while watching footy? The Melbourne - Brisbane Lions game was a highlight for me & Hun-bun for learning new words. Fortunately the West Coast Eagles win today has calmed her down a bit.

Muma has also done some of her house block needleturn applique for the SKOW. We don't have a yellow house but I think muma has her eye on one for us; 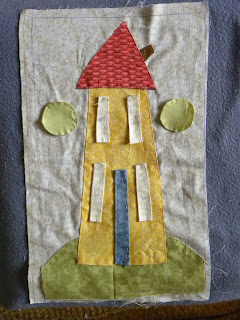 Muma sewed up some booties. I think they might fit my back paws but definately not my front ones; 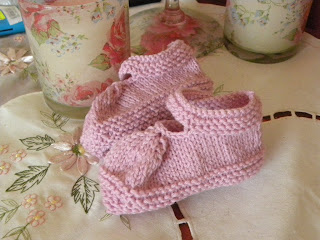 Muma started doing some knitting. She says it is a baby jacket. Who would have thought - I thought knitting was just for kitty blankets???? 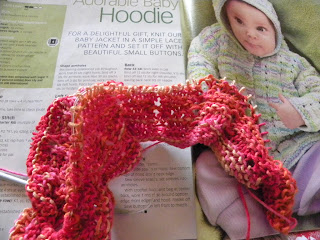 Muma cut out some of the Lilac Love set by Val Laird that she is doing as a workshop on Patchwork Posse. It's supposed to be lilac but muma's a rebel & she's doing pink & maroon; 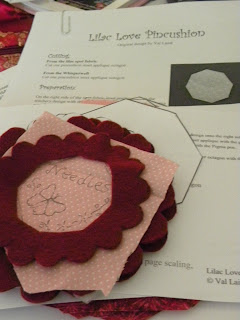 Now I better stop shirking my responsibilities & go check out muma's cleaning. I'll give everywhere a thorough inspection then may need rewarding with a mid afternoon snack for my hard work. Here's my motto for all our friends & especially muma for today; Email ThisBlogThis!Share to TwitterShare to FacebookShare to Pinterest
Labels: weekends with brunnie