I hope you can all forgive my neglect of you all over the last month. It has been an up & down month but I really had no good reason for it. It wasn't even that I meant to, it just happened and now I think maybe I needed to have a rest from something & unfortunately it was sewing, stitching, blogging etc. Work, my Treasurer duties & housework don't go away so naturally the fun stuff was the sacrifice. Hopefully that is over & done with now because I missed you all something awful & have been so lazy & unproductive.

I knitted one of those pretty mesh scarves in bright red & when a friend loved it & asked if I could make her one I did another one. I couldn't get the Moda Vera Honeycomb Mesh I usually use so used a Bobble Mesh, similar on the mesh side but with the cutest little bobbles on the outside edge. It made a pretty scarf & I forgot to take a pic before I gave it away. These are both from Spotlight for $5.99 a ball.

One thing I have been doing over the last month is my usual fallback position - reading. I have had the flu so while in bed last Thursday & Friday I read the latest Elm Creek Quilts novel by Jennifer Chiaverini called Sonoma Rose. 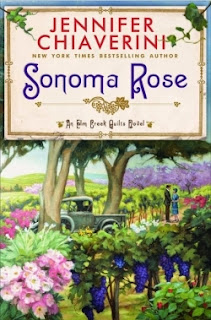 I love all of these but normally the books set in modern times at Elm Creek Quilts & about the quilters are my favourite. This was one of the series set in the past, that fleshes out some of the back story that we have read about in earlier books.

The official blurb reads "As the nation grapples with the strictures of Prohibition, Rosa Diaz Barclay lives on a Southern California rye farm with her volatile husband, John, who has lately found another source of income far outside the Federal purview.

Mother to eight children, Rosa mourns the loss of four who succumbed to the mysterious wasting disease currently afflicting young Ana and Miguel. Two daughters born of another father are in perfect health. When an act of violence shatters Rosa’s resolve to maintain her increasingly dangerous existence, she flees with the children and her precious heirloom quilts to the mesa where she last saw her beloved mother alive."

On Goodreads web site where I log my books I read it rates a 3.76 from 344 ratings. However it was a 5 out of 5 for me. It was a family saga, with a lot of sadness & turmoil but also good people, neighbours that rally around and hope for the future.

Even if you haven't been reading the series, this stands alone as a great book too. If you are already an Elm Creek fan then don't miss it.


Before I go - The times & trials of an old cat! I was sitting in bed watching the Dockers vs Adelaide game & Brutus was sitting on the other side, leg up in the air, washing his nether regions when suddenly he did a backward somersault (maybe with a half pike) & landed on the carpet. I ran around the bed to pick him up,  patched up his ego with soothing words and put him back on the bed. For a few minutes he glared at me as if the say 'What did you do muma!' Then of course, he went on with washing those regions.... 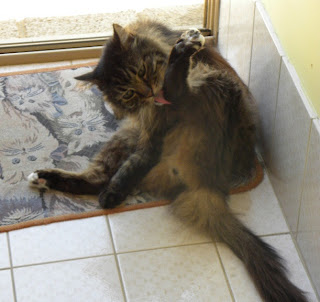