The Luck of the Kiwis!

I know the traditional form is the luck of the Irish but I have been a pretty lucky Kiwi this week.
At last I am following in my mothers footsteps. She was lucky - small bits of luck that makes you smile. That reminds me that my mothers favourite word for it was that she was a 'tin bum' when it came to scratchies, small lotto wins, small horse racing bets etc.
Now I am assuming 'tin bum' meaning an extra lucky person must be a Kiwi saying & I can guarantee it came from my Grandad who also loved a 'flutter on the GGs'. A search online shows that 'tinny' was the saying in Australia around the turn of the century (tin in relation to coins) & that 'tin backed' was even used. I then quote the last line on World Wide Words.com 'The variant tin bum is known in New Zealand.'
So why was I a 'tin bum' this week?
First I was lucky enough to win The DVD of The Hunger Games from Samelia's Mum blog last week & it arrived Wednesday. I have read the 1st book in the series by Suzanne Collins on which the movie is based & loved it. The next one is on reserve from the library. The teen book series like this, Harry Potter, Maximum Ride & The Day After Tomorrow are really my idea of fun - what does that say about me - I'm still in touch with my youthful spirit! I found the movie just as good as the book though the book was much more detailled so maybe I filled in a lot of blanks by knowing the storyline already. Great though & thanks very much to Anorina for this win. 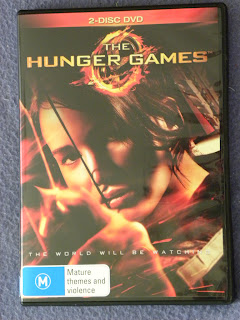 Next I received an email from Jenny of Elephantz to say I was one of the winners for her Embroidery workbook giveaway. This arrived Friday. I can never have enough stitch guides. Thanks very much Jenny! 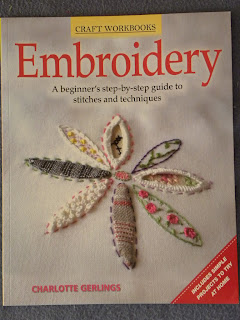 Now the other thing mum told me was that luck - good or bad - always comes in threes!
Also on Friday I also received my latest issue of Vignette (yum yum) from Sarah at Patchwork Plus and included was the Mauritian Bloom Pattern Holder by the lovely Rosie Quinlan. I emailed Sarah thinking it was put in the wrong envelope & got a reply to say, no I won her giveaway too. I am so far behind in my blog reading I didn't even realise. Thanks so much Sarah! 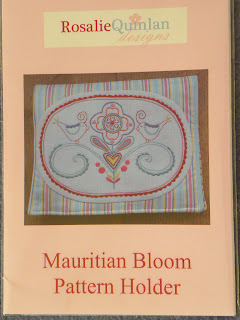 I also received in the mail a new book that is a new US release but I am currently making a swap gift from it so more of that later. To begin with it wasn't the best Friday - you could say I wasn't completely a tin bum - stomach cramps, aching legs, headache & lots of visits to the smallest room in the house. After a full night of this Thursday night I was a bit miserable, so the postie dropping a nice bundle on my doorstep Friday lunch time was very welcome & cheered me up a lot.
Brun did his best to help with lots of cuddles but all the jumping up through the night didn't do much for either of our beauty sleep. 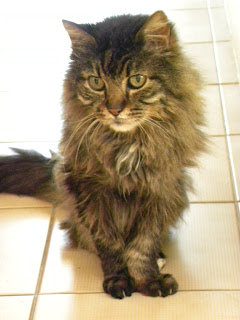 Hun-bun tried to compete with the wins by bringing me a present today too - a RAT! For some reason he still thinks my yelling 'bad murderer Hun-Bun' through the screen door is positive reinforcement.

By the way - no rats were harmed in the making of this picture. He was still alive, just playing dead. Unfortunately I can't vouch for what happened at a later date. Hun-bun picked rat up & tried to bring it inside for me so I ran, screamed & shut the door on him & his present.
Oh & I am still not winning the fluffy bed stand off.... maybe next winter. 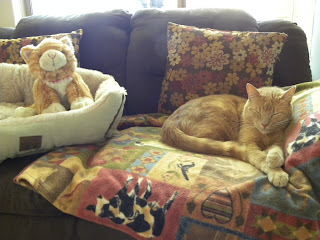 Email ThisBlogThis!Share to TwitterShare to FacebookShare to Pinterest
Labels: winnings