Hi friends - Brunnie still here, just not been writing much & my typist is very unreliable!

Never mind now I have a tale (or tail??) for you. It contains purrs of joy, generosity, snuggliness, squeaks of terror & mumma swearing. Oh it also includes me, Brutus Beefkitten as the hero & Honey-bun as the bad, bad scaredy cat.

It all started one fine shopping day when mumma decided (right or wrongly but generously) that it would be a good idea to buy her two furboys a new fluffy bed for them each to nap in. They are soft & fluffy, spacious and match nicely to the decor of the lounge room. They were also 50% off so what could possibly go wrong. 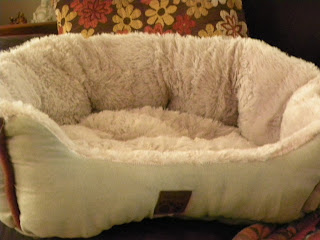 I very happily took to my new fluffy bed (here are the purrs of joy). It is warm & snuggly and sits on the couch next to mumma where I can sit & watch mumma sew. 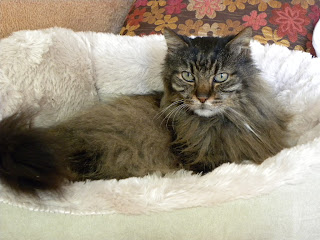 Here my tale takes a turn for the worst. Hun-bun normally sleeps on the other couch on his blankie & mumma thought the snuggly bed would help contain his ginger furs he puts on the chocolate brown couch. Little did she know what she was in for.

Mumma lifted Hun-bun in to his snuggly bed & Hun-bun turned from sweet napping kitty-cat into massive big crying scaredy cat not wanting to go in fluffy bed. He held his paws out on the sides like he was being thrown in the bath, squealed & tried to claw mumma. That was the bit when mumma said the bad words!

So after a bit of planning & no sign of Hun-bun all afternoon & evening mumma decided to put Hun-buns blankie on top of the fluffy bed & entice him in that way. Hun-bun crept in that night after mumma went to bed & slept on the couch, right on the brown. That was the next time muma said the bad words! 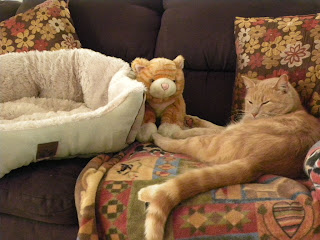 Two weeks later & I can see mumma hasn't given up though. It is just a temporary truce & every so often she puts Hun-bun in the fluffy bed & holds him in there. The record so far is about 20 seconds with mumma lying full on top of Hun-bun to keep him in there. The saga continues......

Email ThisBlogThis!Share to TwitterShare to FacebookShare to Pinterest
Labels: hun-bun, weekends with brunnie