I have been Christmasing up a crafty storm in the last few weeks. I joined in with Narelle from Pins & Needles '1 Christmas Item a Month' but seem to be making a habit of posting every second month. It's not that I didn't make something in March, just forgot to post about it & then put it somewhere special & forgot where so couldn't photograph it. After a bit of a search I found it again...

So here is my March project, my second tri-colour knitted bauble; 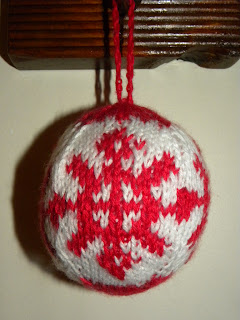 It's a little more complicated than my first tri-colour one so I am feeling a little accomplished & love its little red caps.


In the last two weekends I have worked on two other Christmas items. I brought a kit for a Hatched & Patch Christmas Bon-bon at our May quilt fair in Perth - many years ago. As is my way, I did the stitchery but didn't spend the 15 minutes to do the very basic sewing & tying together. Now that I have, I am loving my little bon-bon and think it will be extra delicious filled with a few Chrissie chocolates. 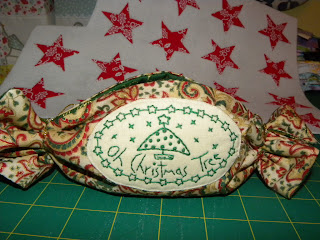 In the background you can see the beginning of my next Christmas project. I loved a free tutorial I found on the blog A Spoonful of Sugar called Gingham Stars. The single decorations looked beautiful but I thought a string of Christmas Stars would look even better.

So in the photo above you can see the 18 stars I cut out from fabric backed with Appli-kay wonder & stuck to the white felt background. I then sewed the fabric star to the felt before cutting the felt stars out. This made keeping the skinny star points in place much easier. 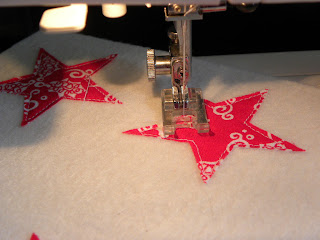 Next I sewed the white buttons to the middle of each star. 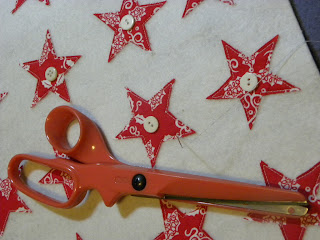 Then I cut out all the stars with nice zig-zag scissors (pinking shears) to give a decorative edge. Don't they look great! 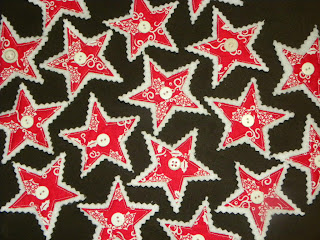 I then hand sewed the stars to red ric-rac to make the garland. I used a very tricky method to space the  stars - using the bottom of my Patchwork & Quilting Magazine and spacing one at each side & 1 in the middle between them. I was too lazy to get up from watching the footy to go to the laundry & get a ruler off the cutting table. Never mind, it worked well. 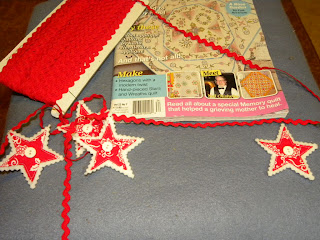 I made 18 stars thinking I would make two garlands of nine stars. However sometimes even those who work in accounting can't count. After making the two garlands & cutting the ric-rac I ended up with one string of 9 stars, one string of 8 stars & one sad, neglected little star.... 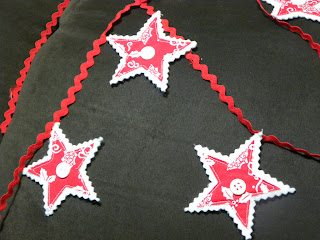 Being the wuss I am, I couldn't let the little star miss out so came up with an idea I am very pleased with. I put the little star on a white felt square & sewed a little bag in the Christmas fabric with a ric-rac tie. Now the little garland of stars has it's own star bag to live in. 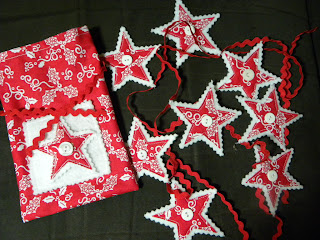 Snug as a bug in a rug is my little star garland in it's bag! 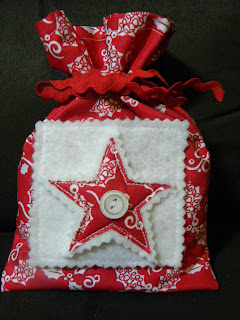 I'm very happy with what resulted from that great tutorial so big thanks to Lisa & Sarah from A Spoonful of Sugar. They have lots of great ideas & yummy tutorials.

On Saturday I also did a quick job restuffing little Brunnie's cushion he used in front of the gas fire. Back in February I thought I should wash it for little brother Hun-bun's future use. Unfortunately it has had a lot of loving from baby Brun & went all lumpy when washed. I opened it up, pulled the lumpy stuffing out, put in a few layers of fugly poly batting and did a quick stitch up. The result I should have expected. Hun-bun came in for the evening as we have finally had a few cool nights in Perth but no amount of prompting would get his to sleep on the cushion. He slept off to the side like always. I have to get through to my big, timid boy that he is now number 1 kitty & that all the benefits of that mighty position are now his. 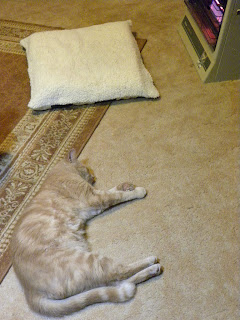 Don't feel too sorry for Hun-bun though. He is getting used to sleeping on the bed & last night woke me up three times crying, standing beside my head, dripping wet from being out in the rain. He got told strongly that he better not have muddy paws on my bedding & then I attacked him with a towel to get the worst of the wet off. Three times! Not the brightest light bulb in the house, my Hun-bun...

Go to Narelle's Christmas projects page to see what everyone else has been making. It's wonderful for inspiration.