Thanks to everyone for your kind & funny comments for Brun's 20th birthday. With his little health hiccups in the last year & my having to come to the realisation that I will lose him sooner rather than later now, this as been an occasion we have both had our hearts set on reaching. To share it with so many friends, both online, at work & home, has been wonderful & very touching. Thank you also for indulging me on my blog & letting me share my obsession with my furbabies, especially my dear sweet old man Brun. It's bizzaire to think I was at the tender age of 25 when he knocked on the door at about 6 weeks of age. I feel like we have grown up together. 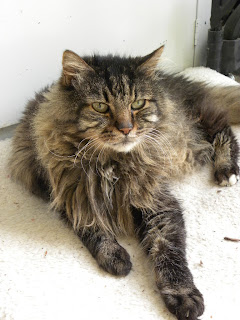 10 minutes after an official portrait I always pose for a better picture, playing with mum's head again!
Brun got a special present from his Facebook friend Horse (whose muma works with me - for two more days only - boo hoo Mich!). Horse was kind enough to send Brun a pack of his favourite sardines in tomato sauce. Isn't that just so special! We are saving them for a Friday night footy treat, the kitty version of pie & sauce at the footy. 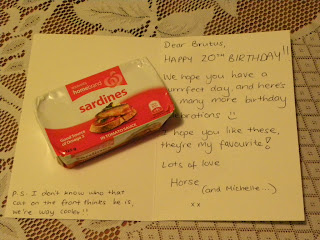 Oh & yes, Hun-bun did get a share of cake but as he was late to rise it was after the photos were taken. Then I abandoned the poor little birthday boy & went to work. He gave me the sad eyes but it was from the bed, on his rug with his electric blanket on two so don't feel too sorry for him. Don't feel too sorry for me either, it was off to do some shopping for little gifts then to host a Baby Shower at work for our gorgeous Regina who is expecting Baby Girl no. 2 in early June. It was very nice of our boss David to not only let us have the party during work but to also be the only man attending the baby shower with 12 of us pink obsessed females. 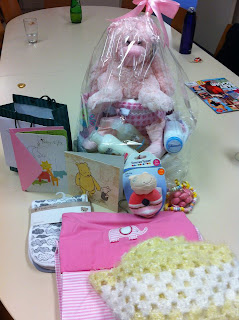 Our clever little Vickie took our $$$ & turned them in to a huge nappy cake containing nappies, wraps, clothes, shoes, toys, creams & the lovely pink teddy Rosie. Doesn't it look fantastic all wrapped in cellophane & a pink bow. I made the lemon & white crocheted blanket but forgot to take a proper photo of it. Nice & snuggly for a winter baby.
Last night it was the monthly WA Quilters Guild sewing night too. It was the Australia's Biggest Quilting Bee night, so there were stalls raising money for the Cancer Council. How can anyone say NO to picking out a few books to bring home for a cost of $6 when the money goes to such a necessary cause. 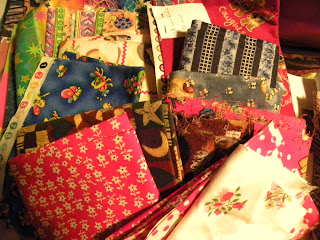 I felt so virtuous as I took a bag full of fabric to donate to our community quilts table too. It raises money to pay for the wadding & backing for donated quilts of which this group makes many each year for local hospitals & charities. I also helped more ; ) by buying the little stack of fabrics above for $5.
By the time I got home at 10pm, a cup of tea & a huggle with Hun-bun, snuggle with Brun, the electric blanket & a book were forefront in my mind. I was just finishing off the tea & a high pitch squealing scared a few years off my life expectancy. It was coming from the sink so I spent 10 minutes peering down the plug hole, running water, peering, more water & it stopped. Half an hour later while in bed the noise started again, not so much squealing now, more warbling. So back to the plug hole. I was asked today 'Did I think there was a frog down there?' I definately thought there was something down there!
As I mentioned I am not the best housekeeper. I had cooked food for the baby shower that morning & left without time to do the dishes. I had got home late that night with still no intention of cleaning up. After moving a few utensils around in the sink I found my shrieking culprit. 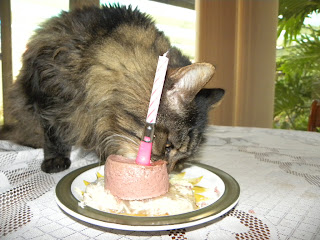 It was Brun's singing candle. It had rolled from the side of the sink into the cutlery there & got wet. So how do you stop a singing candle from squealing out it's outrage at being wet? I tried wiping it, wrapping it in a teatowel in the hope it muffled the noise & thought of taking it to the wheely bin but figured it would wake up the neighbors. The solution was not pretty. I ended up having to drown it & put it out of it's misery. 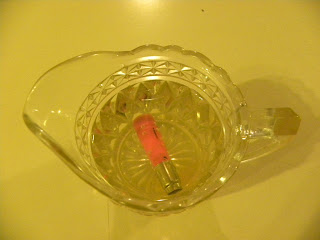