I am very sad to hear that the V8 Supercars driver Jason Richards has lost his battle with a rare form of cancer. He was 35 years of age, leaving behind a young family.

I have never met Jas, have watched him race once at the track & many times on TV & like most fans who welcome him into your home on a regular basis via the TV feel like he's one of my mates.

What made Jas so special to me though is that he is from my little home time of Nelson, New Zealand. To think that at the age of 8 he drove his first go-kart while not far away I was a 15 year old going to Nelson College for Girls & working after school at the local supermarket.

Jas was a champion in waiting, making his way quietly through the ranks. I have always been very proud of my fellow Nelsonian & one of the V8's gentlemen. 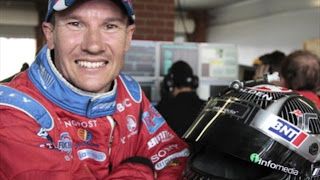 At the time of his diagnosis & stepping back from racing Jas was driving for another gentleman, Brad Jones who had the following tribute;

A statement from the Brad Jones Racing team indicated how keenly missed he will be.

"In the competitive world of V8 Supercars Jason was a rare breed - a driver that could tread the fine line between rivalry and friendship. He was never secretive, selfish or bad-tempered and had endless enthusiasm and energy for his job and team."

"The history books will not do him justice. Given the right equipment JR was easily a front-runner but chose team loyalty over personal gain, determined to work with his crew to reach the front of the grid together."

"Through the highs and lows of racing, JR's uplifting presence and casual, self-effacing wit were unwavering and his effect he had on team morale is irreplaceable."

"He will forever be a member of the Jones family and this is a tragic day in the team's history."

Rest in Peace Jason, the world is a lesser place without you.