Here's a treasure I never expected to have. 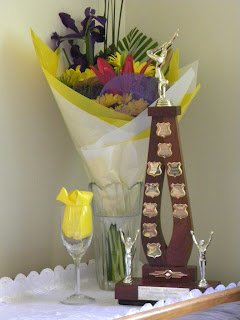 This year I commenced doing the accounts & Treasurers role for a Calisthenics Club where a friend & work mate is the Co-President. In August each year a Family Concert is held where all the age groups from 4 years old to adult perform their competition routines for family & friends. It was my first time watching & it was stunning. I was so proud & the tinies made me cry they were so cute, especially when they tried to skip across the stage & curtsey when introduced. That skipping sure is the hardest steps to master.

The funniest thing ever though was to happen straight after interval. I was helping clean up after we served refreshments to VIP guests when I was told 'Tracee, your wanted on the stage'. I burst out laughing & said 'no, I'm not!' To which I was told firmly but politely to get my self in to that auditorium & up on that stage NOW. After all those pretty wee things that I had watched earlier, I was wondering what on earth is going on?

Anyway, accompanied by a bad case of the shakes, I did enter the auditorium to hear a President speaking about my dedication to the club even though I don't have kids involved. Eventually I did manage to get up on to the stage & was presented with the Presidents Award for 2011 for my time & effort put into the club. It seems kind of ironic that after all the hard work put in by so many people I came home with the biggest trophy of the night. I get to keep that for a year then it goes on to the next recipient who will no doubt be less surprised than I was. The champagne flute is engraved & I get to keep that to remember the honour they bestowed on me. The flowers of course, were beautiful & much appreciated.

Join Melody at The House on The Side of The Hill for more Tuesday Treasures & join in!